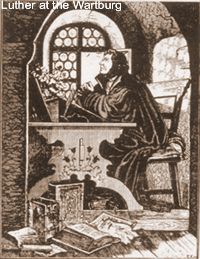 October 31 is generally celebrated as Reformation Day by most Protestant Christians because on that day in the year 1517 Martin Luther posted his Ninety-five Theses on the door of the castle church at Wittenberg, I have stated before - and I say it again - that this contention is not really correct. The posting of these theses may have caused great uproar all over Europe, but it did not bring about the decisive act of secession (yet).

As a matter of fact, Luther had no plans in that direction at all; the thought did not even enter his mind. He believed, in good faith, that he was an obedient son of the mother church and that each and every well-meaning Roman Catholic believer would agree with him in the issue he raised.

An enormous change had taken place in Luther's life. After many years of praying and searching of the Scriptures, he had found the truth that the sinner is justified, acquitted of his guilt through faith alone, and not by good works, not even for the smallest part. Once Luther understood this and learned to put his trust in it, it was, according to his own testimony, as if the door of heaven was opened for him. He, the fearful, struggling, worrying searcher, turned into a happy person.

In 1513, after obtaining his doctorate in theology, Luther was appointed professor of Biblical theology at the University of Erfurt, His conversion took place during his tenure at this University, probably in 1516.

As a priest he was entitled to hear confessions and there were many who came to him to be heard. But he began to notice that many people were complacent about their salvation because they had bought the forgiveness of their sins for cash. They even carried certificates, personally signed by Pope Leo X, which announced their pardon. They had nothing to worry about.


According to those who had close contact with Pope Leo X, he was a man of great charm and erudition. He favored artists and scholars and he was a strong admirer of the classical art forms. The Christian religion was not very high among his priorities. He is the one who stated that he preferred the beautiful accounts of Greek mythology over those odd Jewish folk stories from the Bible.

This gentleman-pope was really bent on building a marvellous monumental church in Rome. However, he had more debts than money. Therefore he made use of an age-old tradition in the church: the indulgence.

The Roman Church taught that a priest had the power to absolve a repentant sinner and acquit him of eternal punishment. For the absolution from temporal punishment, however, one first had to do penance. This could be paid for in the form of good works. Already in the time of the crusades, it became an accepted practice that the payment of a sum of money for a good purpose would suffice. An example of such a good purpose was the financing of a substitute to go on crusade so that the penitent could stay home and look after his business.

This entire system, which had been in effect for centuries, was based on the doctrine of "the treasure of the church," consisting of the infinite merits of Christ and the superfluous merits of the saints, the latter being a surplus of good works beyond what was necessary for their own salvation. The doctrine had been elaborated by Thomas Aquinas and was officially sanctioned by Pope Clement VI in 1343.

The pope was entrusted with this surplus and could draw on it as if it were a bank account. By purchasing an indulgence, after a well-meant confession and repentance, a believer could become a beneficiary participant in this surplus of good works.


Pope Leo X used this tradition for fund raising purposes. He appointed the Dominican monk Tetzel to promote the sale of indulgences. This monk, who had the qualities of a fast talking and convincing salesman, travelled through the cities and villages of Germany; he did a very brisk business which did not leave him personally any poorer either. Scholastic refinements such as the distinction between temporal and eternal punishments did not overly concern him. Buying an indulgence meant forgiveness of sins, simple and straightforward. One could also buy such a pardon for a loved one or a relative who had died and whose soul was in purgatory. This was epitomized by the folksy phrase,

As money in the treasure clings,
The soul straight into heaven springs

And a shameless swindle it became. Pope Leo X approved as long as money kept coming in.

Many people were annoyed by the rapidly expanding business. Tetzel was even forbidden to practice his trade in Saksen. The people there had to make a trip across the border to buy their precious certificates. But the clergy did not protest.


Luther in the conflict


Luther, whose life had been completely changed by the discovery that justification is not because of works but of free grace, was horrified by this swindle. He wished to start a discussion about this business and for that purpose he formulated his theses. But once he began formulating his thoughts, more of the concerns that had grown in him since his conversion came to the fore. He understood clearly enough that this trafficking in pardons was not an isolated incident, but rather a symptom of an ever-growing deformation. These are a few of his theses:

32. All those who believe themselves certain of their own salvation by means of letters of indulgence, will be eternally damned, together with their teachers.

36. Any Christian whatsoever, who is truly repentant, enjoys plenary remission from penalty and guilt, and this is given him without letters of indulgence.

50. Christians should be taught that, if the pope knew the exactions of the indulgence-preachers, he would rather the church of St. Peter were reduced to ashes than be built with the skin, flesh, and bones of his sheep.

62. The true treasure of the church is the Holy Gospel of the glory and the grace of God.

94. Christians should be exhorted to be zealous to follow Christ, their Head, through penalties, deaths, and hells;

95. And let them thus be more confident of entering heaven through many tribulations rather than through a false assurance of peace.

These theses were intended as points for discussion between Luther and other theologians, but something glowed in them, that strongly appealed to the simple, non-scholarly believers. In no time the theses were put into print and read throughout Europe. Many expressed their agreement. Pope Leo X was not too concerned. Accord ing to him Luther was "a German drunk who would change his mind once he had slept it off." Luther himself did not dream of a breach with the pope and the papal church. He still had the impression that all kinds of misunderstandings stood in the way and that once these had been cleared up the clerical officials and dignitaries would agree with his thoroughly Biblical theses. In 1518 he even wrote a humble letter to the pope which contained the following phrases:

I adjure before God and all His creation that I never have had, nor have now, the intention in any way to attack the Roman Church and the authority of your holiness or to do damage through any trick or device. Yes, I have this assurance that the power of the church exceeds everything else and that nothing under the heavens or on the earth may be placed higher, except Jesus the Christ, the Lord overall,

Luther was open and straightforward when he wrote these words. But he made one clear evangelical proviso: "except Jesus the Christ, the Lord over all." Rome, however, teaches that Jesus Christ speaks and governs through His deputy-on-earth, the pope.

When the impact of Luther's actions and the reactions to them began to take on dimensions beyond his expectations, the pope attempted to appease Luther. In 1519 he offered Luther a position as archbishop as well as a cardinal's hat, provided he promised to be silent about the controversy. But Luther was not looking for material wealth and now that his theses were sharply attacked by many different high-ranking members of the clergy he could not remain silent. Instead there was a long series of polemics, disputes, and arguments with many important scholastic theologians.

These confrontations with his sharp thinking opponents forced Luther, who could not and would not retract, to draw the eventual conclusions from his theses. In that respect these encounters had been most profitable.


The bull of condemnation


Finally Pope Leo X took it upon himself to act. He ordered a commission to draft a "bull of condemnation" which was published in Rome on June 15, 1520. In it forty-one "heresies" of Luther were identified and denounced. His publications were to be burned. Luther was given sixty days to renounce. That was the last straw. Luther could only conclude that reconciliation with the pope and the Roman Church was impossible if he desired to hold on to the gospel of the Lord Jesus Christ.

On December 10, 1520, at Wittenberg Luther publicly consigned the bull and a copy of the Roman canon law to the flames, with the words:

"Because you have grieved the Holy One of God may eternal fire consume you."

By "the Holy One of God" Luther meant: the Christ, the King of the Church.

While Luther performed this official act, his students who were present at the occasion sang Psalm 130 in Latin (De Profundis):

Out of the depths of sadness,
O LORD I cried to thee;
Thou who canst fill with gladness,
Lend now thy ear to me.
O Fount of consolation,
Attend unto my cry,
Hear thou my supplication
And to my help draw nigh.

If thou should'st mark transgression,
O LORD, who then could stand?
For evil and oppression
Are found on every hand.
But thou does pardon fully
All our iniquity,
That we may serve thee truly
And fear thy majesty.


That is how it all began - not in a mood of recklessness, but in humble awareness of own guilt. There is a degree of solidarity also in being responsible for the depth of deformation and decay in the church.

The act of December 10, 1520, when Luther broke with the ecclesiastical hierarchy, was the actual moment of the Reformation. But the event of October 31, 1517, was an indispensible and richly blessed part of the deeds and actions that the Lord used to lead up to the final, critical moment.

Therefore we will gratefully commemorate the greatness of God's works on October 31, and on December 10, and on any other day

And we shall also pray.

Seeing how the spirit of error has its impact in churches which at one time were considered the bulwark of orthodoxy and perceiving that many believers are hardly aware of the continuing deformation that is taking place, while those who realize what is going on dare not take decisive steps, we bring prayers and supplications before God: O Lord, bring back all Thy exiles!

The God of Martin Luther lives and He is a Hearer of prayer.


From Nederlands Dagblad.
Revised and translated with permission of P. Jongeling.